A while back I made the pearl necklace that I plan to wear on our wedding day. I've been going back and forth between whether I should wear studs or drops with it because I don't want to have too much jewelry going on... but I love big earrings. I was looking around on Etsy to see if there were any gold and teal earrings when I came across these guys: 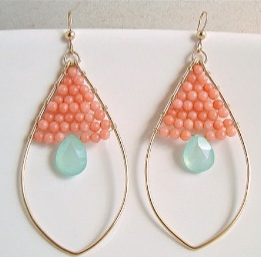 Usually I don't like things to be top-heavy, but the nice thing about it in this case is that it'll keep my neck more open since the weight will be at the top, rather than down by the necklace. I went to Nomadic Notions to see if they had any chalcedony, and lucky me, there were two stones left. Apparently today is 10% Tuesday, so I got them for 10% off which was a nice bonus of $0.80 back in my wallet, haha.

I debated between using gold beads or pearls in place of the coral ones used on Etsy, but in the end I decided to go with pearls to keep the earrings and necklace cohesive. I actually had some of the smallest pearls from the necklace left over, so I used those rather than buying new ones. Below is my little arrangement of how I planned to string them. 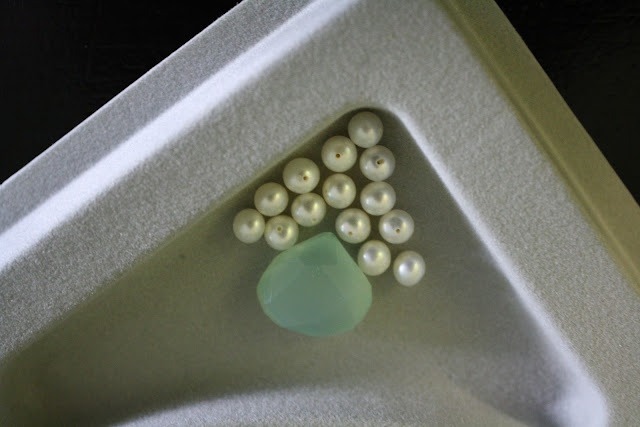 For my supplies I had the chalcedony, pearls, 20 gauge (thick) wire for the hoops, 28 gauge (thin) wire for the beads, earring hooks, wire clippers, pliers, and what I call my "wire straightener" which is a pair of pliers that are wrapped in silicone. You use them to pull the inevitable kinks out of the wire by sliding them through the silicone. It's sort of like using scissors to curl a ribbon. 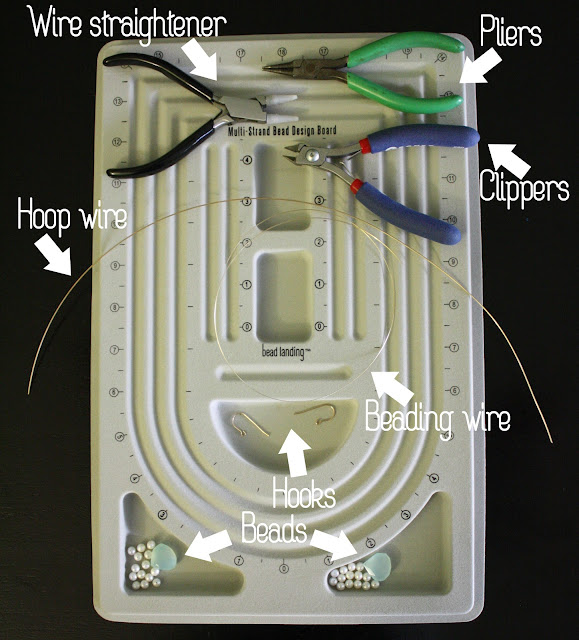 First up was to make the hoop. I cut the wire in half and grabbed the two ends and pulled them together, made a little crimp in the bottom, made little loops in the wire where I wanted them to connect to the hook, and trimmed the excess. It was difficult to keep the wire from kinking and even more difficult to get the kinks out once I had crimped the bottom because I didn't really have anything to hold on to. I was a little disheartened with how wonky it looked, but I went ahead and put it on the hook. 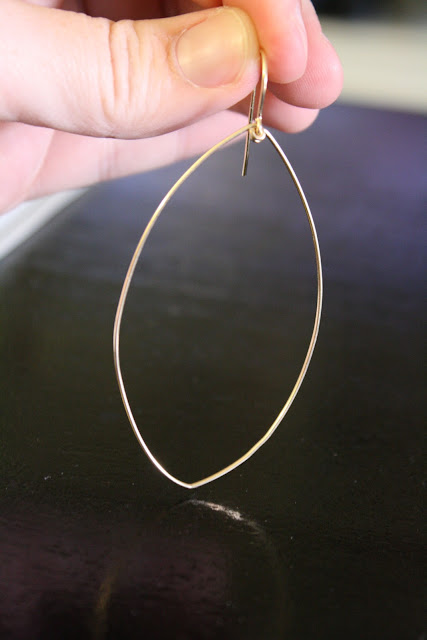 Next was stringing the pearls and chalcedony. I took the 28 gauge wire and twisted it around the side, strung the pearls on, then wrapped it around the other side. I was planning on having only one pearl on the first level, but there was an awkward amount of space with just one so I decided to start with two. 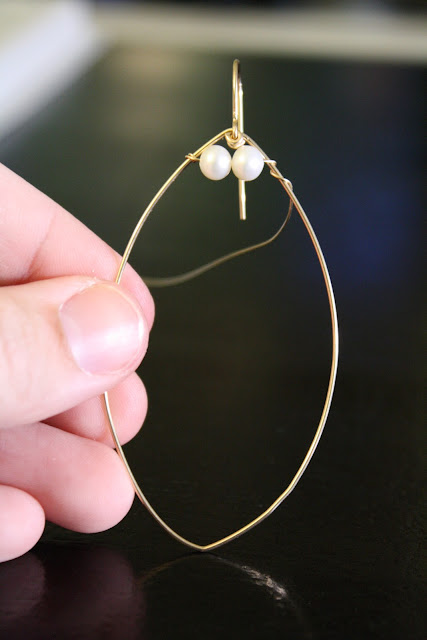 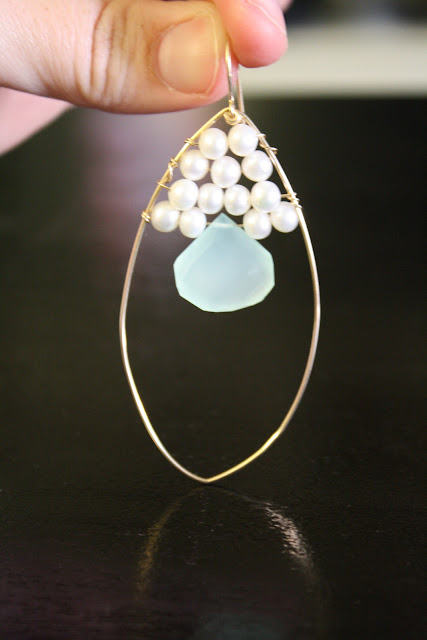 I repeated the process for earring numero dos, and voila! 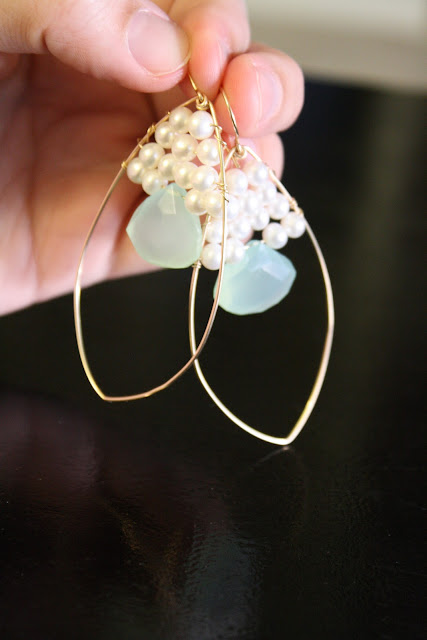 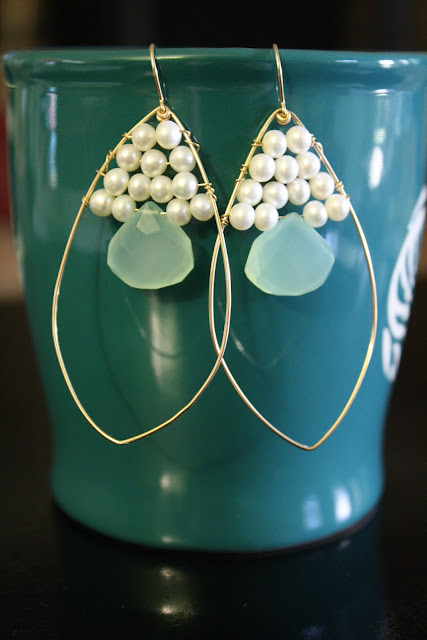 They definitely look homemade, but I think I'm ok with that. This past week I was at Austin's A Christmas Affair which has tons and tons of vendors (maybe 50-100?). I could have gotten more "perfect" looking earrings there, but I have so much more appreciation for things I've made myself, so I'm happy to go this route. 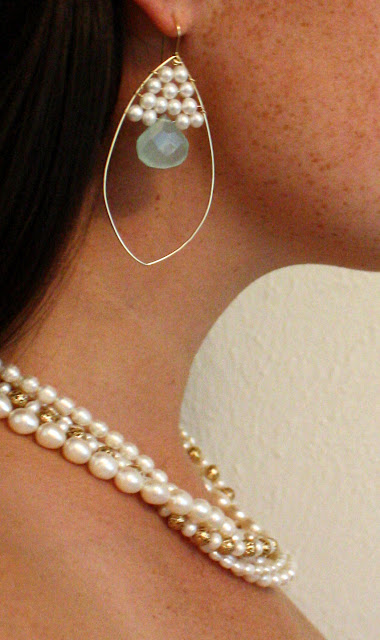 I think that being top heavy really keeps them from competing with the necklace. Whew.

For the wedding breakdown:

Something old: my great-great grandmother's wedding ring that now belongs to my mom
Something new: my wedding dress
Something borrowed: my mom's ring again
Something blue: these earrings!
Six pence in my shoe: still working on this one

Our wedding is really not even going to be that traditional, but having something old, new, borrowed, and blue is for some reason a must. I don't know why I feel so compelled to do these... I'm not even superstitious!

Have any of you worked with wire before and have some tips? The only other thing I can think of is to somehow make a form that I could wrap the wire around rather than trying to use my kink-inducing fingers.
Posted by Unknown at 4:25 PM

I'm newly married and ready to transform our first place! I'm going to renovate, decorate, and enjoy the good life in our first home as a couple.